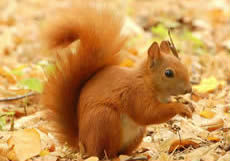 - Red squirrels are members of the rodent family, typically with a head and body length between 205mm and 220mm and a tail averaging 180mm.
- The red squirrel's drey is built from sticks and moss and is usually at least 6 meters off the ground.
- Red squirrels can live up to 5 or 6 years.
- The kittens are born blind, without teeth or hair and the mother takes full responsibility for their weaning.
- The red squirrel moults its coat twice a year, although the ear tufts and tail only moult once, in the autumn.
- Red squirrels can have 2 litters per year, usually in March and July, producing 3 or 4 kittens in each, with a gestation period of between 36 and 42 days.
Grey Squirrel Facts

- The habitat of the grey squirrel is usually in woods and parkland of both deciduous and coniferous trees.

- The grey squirrel is at its most active at dusk and dawn when it goes foraging for whatever seeds, shoots or fruits are in season.

- Grey squirrels have small thumbs on their front paws to enable them to securely hold their food.

- Grey squirrels can be preyed on by foxes, owls, raccoons, hawks, and possums.

- Grey squirrels are usually solitary creatures, but in the winter months they will often share nests to generate warmth.

- Grey squirrels are prone to suffering from mange brought on by mites which can leave them nearly bald temporarily.
Black Squirrel Facts

- The black squirrel is thought to represent just 1 in 10,000 of all squirrels in North America, making them extremely rare.

- Black squirrels can be found in large numbers throughout Ontario, as well as in certain parts of Ohio, Michigan and Wisconsin.

- It is said that most American citizens have never actually set eyes on a black squirrel.

- Black squirrels, despite being considered a separate species, are in fact grey squirrels in a different color phase.

- The black squirrel is the official mascot of Haverford College in the United States, and specifically the varsity athletics team.
White / Albino Squirrel Facts

- In the wild white squirrels rarely survive too long as their coloring hampers their ability to hide from predators.

- There is often a greater chance of finding white squirrels in the grounds of a campus as it is a safer environment for them to live.

- The reason the white squirrel's fur is such a color is due to a variation in the production of melanin. A significant reduction will give the animal a white coat.

- The white squirrel capital of the world is in Olney, Illinois, where there is a huge thriving colony.

- The main difference between albino and white squirrels is the eye color, with Albinos having pink or blue eyes, whilst the white squirrels have black.
General Info
Equipment & Tools 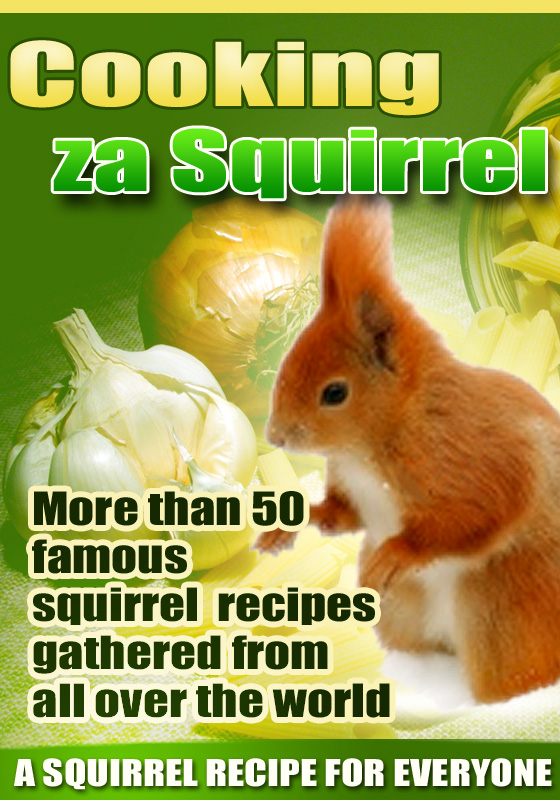 Connect With Us
Watch Now